Since I am currently working on an Asian drama database, this one arrived to my hands and with all the memories of it that I had the second I saw the poster, I had to re watch it. For the fun of it, to find out I liked it even more than the first time. I don’t think there is actually a real drama fan that didn’t watch Rooftop Prince. Specially because it turns out to be one of the most wonderful and well written stories to ever be portrayed in fantasy land.

I say this because time slip stories tend to be dull and boring after the adaptation point. This one has a whole complete meaning behind it. And also, the way characters adapt to their new reality well is absolutely out of the ordinary.

So if you haven’t yet seen the wonderful Joseon Power Rangers or you are doubting for any reason it might be, go ahead and do it. You will get the best feelings from it and won’t regret a second! You know I don’t usually say this. 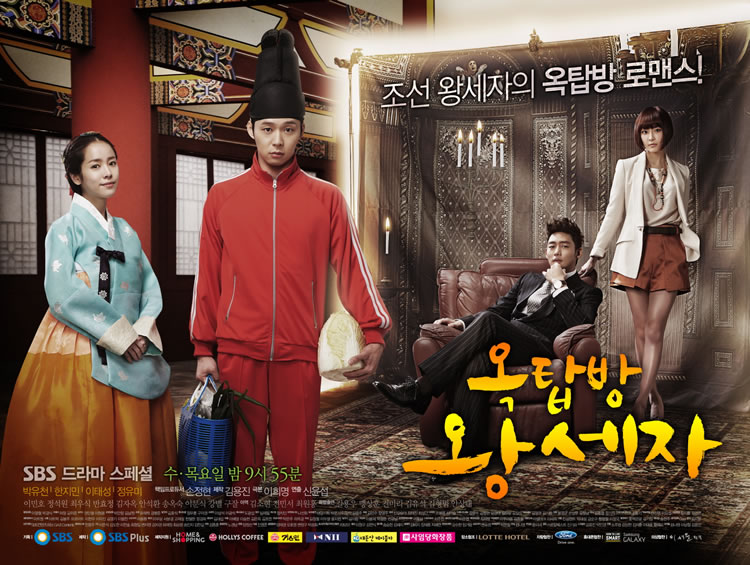 Prince Lee Gak married the woman he wasn’t supposed to. Partly because she was really beautiful. On the other hand she was a spiteful human being that burnt the face of her younger sister. The one who was supposed to marry him in first place and destined to be the Crown Princess.

Someone murders this evil Princess the night of the Royal Marriage Ceremony, when trying to investigate this sad happening Prince Gak gathers the best three man to help him in the job. The group will follow a lead of poisoned persimmons but will get chased to death by the assassination perpetrators. When they were about to get caught, time slip happens and they appear in the modern Seoul in a rooftop apartment rented by Park Ha, a young cheerful girl that of course will have the shock of her life.

In the present days, some years ago, there was a situation between Park Ha and her step sister, who abandoned her because of jealousy when she was just a little girl. Both sisters and the ones in the past are the same in personalities and faces, although there is a little deviation in the family relationships.

Prince Gak has his present self too, his name is Yong Tae Yong, but in his case he suffered an attack in hands of his cousin and has been missing since then.

So the story will try to solve two cases at the same time, the murder of Princess Hwa Yong in the past and the present missing state or probable murder of Yong Tae Yong. For this matter the Joseon Power Rangers as fandom calls them, will have to learn how to live in a completely new era and learn everything they can in the hands of the adorable Park Ha.

Is Park Ha in the present and Boo Yong in the past, right now is a girl that went to America to work and she comes back when she finally finds her father. Although she never sees his face, she meets Yong Tae Yong before his accident back then, he delivers a postcard with her drawing playing with a yellow butterfly on her shoulder. Back in time, she’s the little one who’s face gets burnt by her evil sister.

Is Prince Gak, a spoiled but straightforward young man that will do anything to find out what happened to his beautiful bride. Although when he gets to the present he demands to be treated the same way and of course, times are different now. It won’t be long till he finds out the reason of the time slip and that everyone has a future self.

Is, back then, Princess Hwa Yong, the cause of all evil, plain jealous and a hateful personality, all she cares for is being the center of attention and stepping on anyone’s head, even her own sister’s face. In this time, she’s an ambitious CEO’s secretary that hasn’t changed at all from her past self, she even let her little step sister gone missing after telling her she was getting milk. She’s a spiteful character but actress does a great job.

Is Yong Tae Moo, the male version of the present Se Na (Princess Hwa Yong). He’s envious of his cousin to the point he even lets him drown when they have an argument in America. There’s no trace of him in the past, at least that we know of until the last parts of the story. He has an annoying character in this drama, and he also does a great job.

Prime Minister and I, Running Man, The Great Seer

Is Song Man Bo, Prince Gak’s first man. He’s chosen due to his strategic skills and ordered as his personal assistant.

Is Do Chi San, a disguise expert who knows everything that goes on in the higher social classes. He has the ability of overhearing anything that passes near his ears.

Is Woo Yong Sool, the expert martial artist brought by the Prince as his own bodyguard. He learns to fight in order to defend his people and of course, the Nation. Since the Prince says he’s the Nation, he’s called to protect him.

These last three characters deserve an article just to talk about them. They are the most adorable bunch you will ever find in any drama. I hope they had one of their own since their chemistry is not only perfect but hilarious every time.

There are many other characters that spice up the plate to this really well done story. But I would like to end this article this month. Heh.

Why is that Rooftop Prince is absolutely adored by its thousands of fans all over the world. Well first is its well written script. Originality also does its part. On the other hand all performances are great. Funny parts are everywhere and sad ones are really intense and meaningful. Music choice matches the environment to its perfection. And lastly and most of all there is not a single minute that anyone could leave out from this wonderful story. If you haven’t seen it, well you are very lucky. You have a great drama to discover and if you did, well let’s all watch it a hundred times! 😀