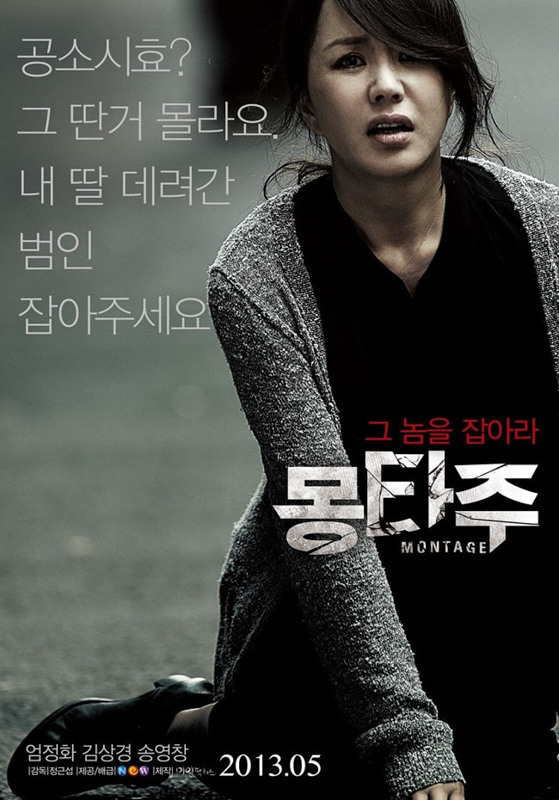 I had no idea this movie even existed. It’s name is Montage, and I decided to watch it because of the premise that seemed interesting. As a result I ended up loving everything about it. From script to filming techniques, it turned out extraordinary.

A small and not so famous cast, excepting some names of course. Just because you readers love Asian movies and dramas you might know more names than the regular viewer.

The movie is a complete thrilling experience in which we have no idea what is going to come next. This happens not because we don’t try to prevent the happenings in our heads. Nothing in this experience goes like we think it will. Don’t you love those kind of movies where they play with what you have been thinking?

A crime has been committed fifteen years ago. Today, the detective that was in charge of the case by that time came to tell the mother of the victim that the investigation will be closed for good. He made her a promise to find the killer of her little girl, but in spite of his efforts the case is coming to an end.

When this happens another similar situation takes place. The detective leaves the force due to exhaustion but he finds out that the same crime is being committed again. After knowing this he decides this time he will be able to catch the culprit and put him in jail.

This is just the starting point, from that moment on we will have action, suspense and the feeling that everything is going to end up any minute but it doesn’t. A dark story that drag us down between pain and impotence to kick us in the brain when we less expected.

A bright point between all this darkness is that director was able to add some tiny bits of comedy that are a breeze of fresh air among all these situations, that’s what makes it absolutely bearable.

Kim Sang Kyung (Memories of Murder, The Tower, White Christmas) the desperate detective that tries to find this assassin with everything he has. Even if he looses his job because his bosses are too lazy to do things right.

Uhm Jung Hwa (Mama, The Law of Pleasures, Top Star) is the desperate mother that lost her little girl fifteen years ago, and she can’t allow herself to stop looking for the culprit.

Song Young Chang (Nameless Gangster, Deranged, Thirst) is the new kidnapped girl’s grandfather, another desperate being until something goes wrong.

A well written story with bits of comedy. Extremely well filmed with some scenes that will leave you breathless. A great action, thriller, suspense movie with everything that it has to have. An absolute must watch!