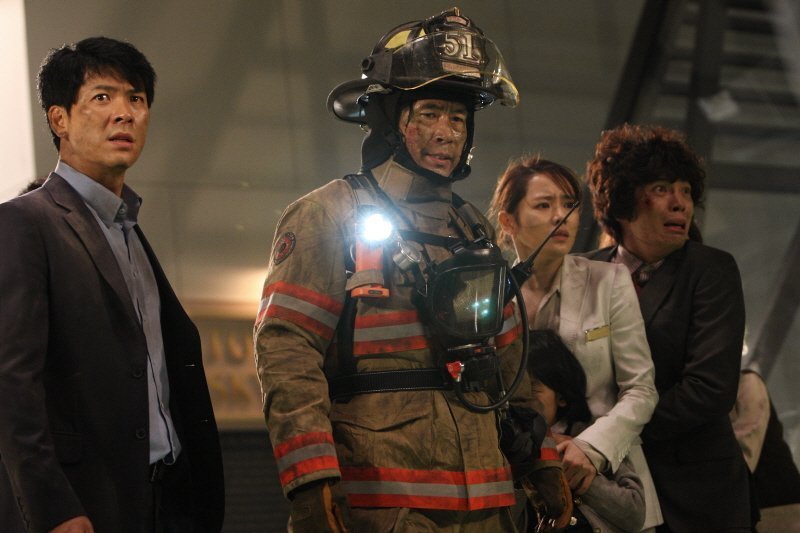 I tend to scape catastrophe movies, just because American ones made me loose faith in them. Of course there’s a parallel universe in Korean cinema, where we must fight our prejudices almost constantly. I’m glad that’s the case with The Tower, since there’s a whole new world to discover.

The Tower is a movie that had a lot of hype the year it aired. Breaking blockbuster records due to the September 11th anniversary. But the thing is, it has nothing to do with it.

For those that are a little older, this movie will have glances of “The Towering Inferno”, aired in 1974 (I though it was from the eighties). It’s theme is very similar, saving great differences like casting performance and film style and editing. It’s obvious that in these areas, technology and time have worked wonders.

If we put one versus the other, the first one has nothing to do with this one. But the script is basically the same although they start from different points of view.

During Christmas Eve, a huge party is organized on the recently inaugurated “Tower Sky”. That is the name of a luxury skyscraper that comes to change Seoul’s skyline. It’s a big event that, as usual, has everyone gathering for the occasion.

The headmaster of the building doesn’t pay attention when an operator warns him the water pipes that feed the entire fire alarm system are frozen. This is the starting point of the unfortunate events chain that will have us pretty entertained.

During the party, something unexpected happens (well maybe not for us, since we’re here to watch an action movie) that provoques many people to end up trapped in the upper part of the building. After that, the fire that will shut down the exits. People will only be able to be rescued through emergency services. That’s when the movie finally starts.

Until here, I have two issues: the uncountable amount of movies of this genre that I have seen and the capability of the director to keep surprising us, despite that. The script is nothing out of the ordinary, although performances are superb. The events, won’t surprise us completely, but they choose an attractive way of revealing them. This turns the scale towards the good result.

You have so many known faces, I can’t describe their parts in detail but I’m pretty sure you know them:

I could continue naming actors, they’re all well- known and extremely good.

Another difference I find between the Asian and the American movies, is that in Americans we find that everyone is just and incorruptible. Here we will find that things are very different. I don’t know if this is a mirror that sees the truth (which I think it’s really sad), or they are just trying to add some drama to the whole situation.

Is not the best action movie out there, that’s for sure. But it’s a well made movie that will entertain you. Bring up the pop corn and enjoy!

Oh! And, something important, you can watch it on Netflix!

One thought on “The Tower Korean Movie Review 2012”