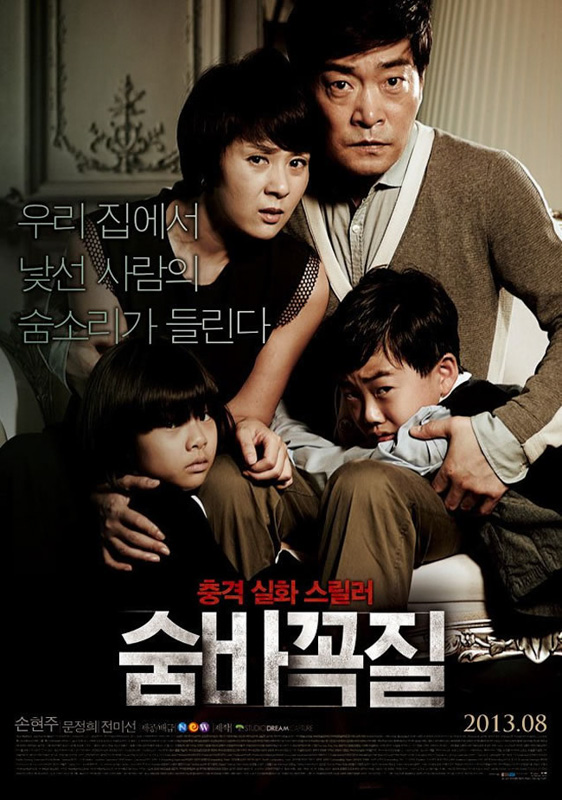 I waited anxiously to watch Hide and Seek just cause I think the male lead is awesome on every part he plays. Plus there was a great hype with it on television and magazines. The sad thing is that the movie is a deception. To the point that I wouldn’t recommend anyone to watch it unless you’re really short on the “To Watch” list.

The storyline starts really great with thrilling moments, suspense and a good premise. But as soon as things start seeing the light it just gets bad by the minute. Errors like hitting someone in the head when he’s wearing a helmet. Using the same strategy three times in a really short amount of time left me thinking, what the hell happen here?

I don’t know if I’m too used to movies that have almost no leaks on their scripts. Or that the filming is so good that makes me point small things out. But I really don’t think that the faults here were that little.

Synopsis of Hide and Seek

Strange murders start happening in a very poor side of Seoul. An apartment complex holds a mystery that neighbors wouldn’t dare to reveal. Suddenly one of the tenants disappear. The owner (or the one that is in charge of collecting the rent) calls the deceased’s family to explain the situation. He also asks them to come pick up his stuff.

The man’s brother hasn’t had contact with him for a really long time. An old grudge took them apart and they haven’t seen each other for years. Even tho the oldest tried to make contact several times. This man has some psychological problems that will be revealed ahead in the story. When he goes to pick his brother’s belongings the thrill chain begins.

Son Hyun Joo (Empire of Gold, The Devil’s Game, Definitely Neighbors) is Sung Soo. This strange TOC man that has to deal with his brother’s disappearance. Also face the fact that he might be a serial killer. If someone can portrait a troubled person, well I think he’s the man. For me the best of the movie and the reason I ended up watching it till the end. Even tho the movie wasn’t great, his performance is as usual, great.

Jeon Mi Sun (Five Fingers, Baker King Kim Tak Goo, Passionate Love) is Sung Soo’s wife. The one that you will be happy if she gets killed or trapped or just burn in fire. The woman can’t be this stupid. Leaving the kids go play alone in a dangerous neighborhood while she talks over the phone. I never fully like her performances, and this isn’t an exception, sadly.

There are a few more names in the cast but I wouldn’t like you to notice them before you watch the movie. It might spoil the story.

There are lots of things going on on this movie. It is like a big salad of meanings that in the end has two options. Either be extremely awesome or just end like a forgettable movie. Stupid mistakes like being chased by someone and leaving the door opened. Or leave your kids alone when you know someone will try to get them. Everything makes me go with the second option.

There are the type of errors that we see in a bad american thriller movie. Or at least the cliches we laugh about. And in the end I think we expect a lot more that what the movie actually gives us. It’s sad. I was really exited to watch it and it would have been way better if director would have avoided the obvious exits.

It’s not completely bad, but in the end is all about tastes so you might wanna see it. Don’t tell me I didn’t tell you beforehand!