The whole idea of the bad guys turning into justice agents was appealing enough to get my attention. When I realized the cast was so amazing, then there was no doubt I should watch it. On the counterpart, even tho it became a great story with many focus and debate points, I found out some things that prevented the whole drama to be an top ten, at least in my really long list of favorites.

Moral debates, deeply rooted into human behavior, life and death decisions and desperation. Love, hate, family, and mostly the loss. All possible ways of dealing with it the wrong way and still try to find a light at the end of the tunnel in the very last breath. 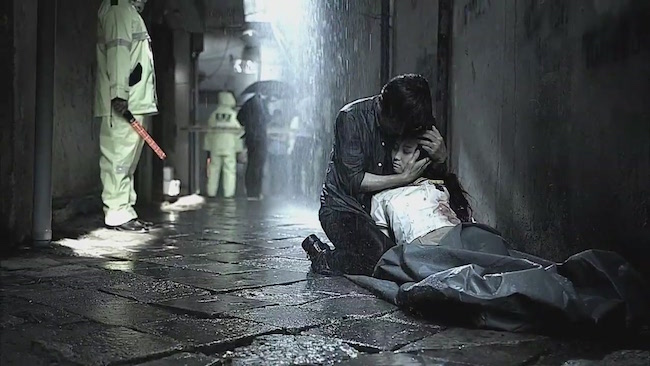 As we previewed it in our Bad Guys Korean drama trailer post this story was a bad guys turn into good agents type of story, what we didn’t know was that behind that premise we will find a whole load of material that would make us go out from our comfort zone and think differently of people that have committed to many mistakes in life.

Murders, investigations, bad cops, good criminals, everything gets mixed up in a story that will keep you trapped till the very end. Everything in this story points towards the seek of redemption.

Is Oh Gu Tak, a detective that started using violence against criminals as a way of releasing his despair after his teenage daughter was murdered. He promised revenge and due to his behavior he’s been out his job, fact that makes him perfect to deal with this group of criminals that will be in charge of the really violent cases. I found his tone of voice to be sedating, to the point that it turns monotonous, beside that, he wasn’t bad for the part at all.

Rocking on Heaven’s Door, The Royal Tailor, Kundo: Age of the Rampant

Is Park Wong Cheol, a gangster that will be given this grace period so he helps revealing the hidden side of the mob. I think he usually plays the same style of roles, although in this case, we can see him get in touch with his emotions, which is a first.

Dr. Stranger, You Who Came From The Stars, Hot Blood

Is Lee Jung Moon, the strangest of them all, since he’s a psychopath that has been accused of murdering his own parents. He’s in charge of the mysterious side of the story, since we won’t know what happens with him till the very end. A very interesting character from this talented actor, well played.

Inspiring Generation, Searching for the Elephant, Moon and stars for you

Is Jung Tae Soo, a contract killer that has a huge weight on his shoulders. His cold blood will start melting when he meets the wife of one of the men he killed. A great performance as always from this actor that should get more lead roles.

Is Detective Yoo Mi Young, the person in charge of making these group get along (or the best they can) and help them achieve their goals in the complex investigations. I didn’t like her part at all, her face looked stiff the whole drama, and had no emotions whatsoever. One of the few things I didn’t like at all.

Is Prosecutor Oh Jae Won, a mysterious character that will earn leadership as we enter the complete story. One of my favorite characters as in delivery, hopefully he will get more parts soon.

There are a few not so great things about this drama that could prevent you from watching it, two performances that might seem a little too annoying to the really hard emotional facts that go on in the plot, which you probably will found out in the starring division of the article.

Over all the story and mystery behind the cases is fantastic and really well written and directed. So even tho it has some details I encourage you to watch it. It’s probably one of the best dramas we’ve gotten in the last few months. There’s also a clue left, that there might be a second season. Let’s wait! 🙂