To describe Shield of Straw just as an action movie I think it’s not fair to it. Since it gives way more than it meets the eye. From the start the way of filming is fantastic, but also the story behind is so strong that we can’t ignore it even if we want it. If I have to let you know about the story there is no way I could just write a synopsis. Simply because there is so much meaning towards our actual way of life than it’s impossible to be left out as a mere description. 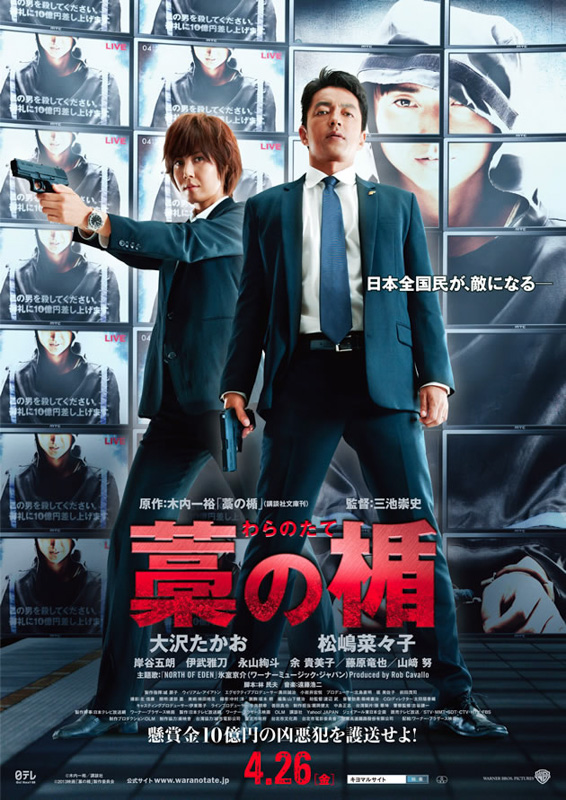 The movie starts with a very strong and beautiful, yet horrifying, close up scene of a girl’s black shoe over a puddle of blood under the rain. We also see a lonely old man’s figure standing with an umbrella and wearing a yukata. We will find out later this man was the little girl’s grandfather.

The police knows who the murderer is. Her grandfather does too, the old man is a millionaire and he wants this criminal killed at any cost. For that purpose he posts a full page ad on the newspaper with the killers face reading: “Kill this man and get 1.000 million yen”. People would also get a great amount of money if the even tried to kill him.

Since this was made public he turned himself in and the police couldn’t keep the murderer’s transfer to Kyoto hidden. Imaging the amount of people that would like to get this amount of money and if that wasn’t enough, there was a website that broadcasted his every movement.

A race against greed, not knowing who to trust and adding the unsettling fact that he is a complete nut job and a despicable human being (if we can call him that).

And here’s where our minds start doing the job. Thinking about how much worth it is to keep him alive. Not because of the money, but because with this histeria the money created people are being hurt and killed. Everyone is becoming what they hate, but not because of justice, but due to their own greed and necessity.

Nobody will be left out from this moral struggle. Adding that most of the policeman in charge of the transfer have had personal losses due to crimes.

It’s a great action movie that won’t let you breath. And  it will be constantly confronted with human nature and rational postures. Highly recommended.