Roving Edge is is based on a Japanese novel called Samayou Yaiba. It has a previous version that’s also Japanese, The Hovering Blade, from 2009. There are a lot of crossovers from one origin to the other, but the way of filming them is so different that I’m pretty sure we could be watching two good independent movies.

I think there are no crime movies like Korean ones. The way they tell the stories is really different from the American or Japanese style. This type of movies have an unusual capability of make us reflect over people that turn out to be murderers due to different causes. For example, Park Chan Wook’s Vengeance Tryology, I am Murderer, in which we can find the male lead of this story, Jung Jae Young. 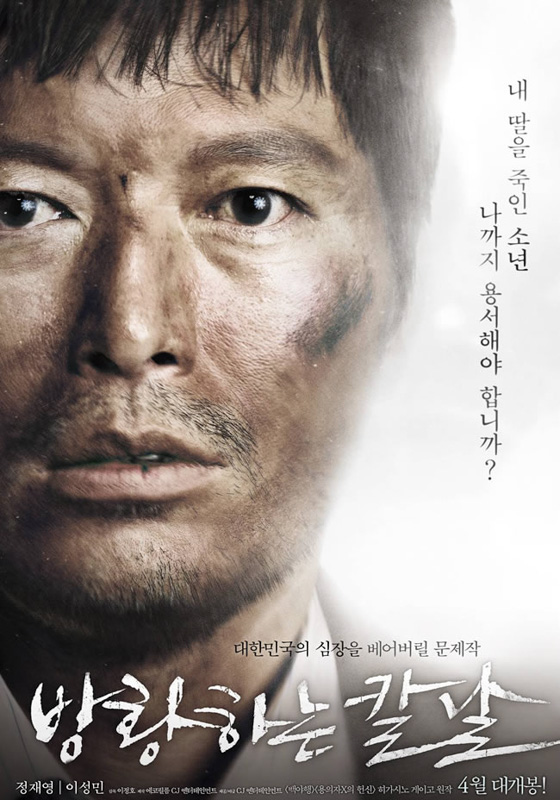 The plot, as it was in The Hovering Blade, talks about a man that has lost his wife. He now lives with his teenage daughter. One day Soo Jin (his daughter) is assaulted, raped and murdered. The man turns out to find his daughter’s assassins and kill them in revenge. Now he has to deal with the law.

Images as seen in the trailer are really hard, and we will probably end up with a hole in our chest for some hours, but Jung Jae Young is an amazing actor and I can’t wait to see one of his movies again since I think I have seen them all. For now, until we’re able to finally watch it, let’s get hooked with the trailer.