I have so much to say about The suspicious housekeeper that I don’t know where to start. Based on a Japanese dorama (‘Kaseifu no Mita’) that aired back in 2011. SBS brings it to Korea after the amazing Empire of Gold. This is one of the dramas that when we get to see the cast in the first script reading, we can’t help to smile.

Synopsis of The Suspicious Housekeeper

The story has as main character Sang Chul’s family. A man that has lost his wife and has to raise his four children by himself. The task is tough, specially for him, because he can’t handle them or himself. Petty and troubled, ends up hiring Bok Nyeo, a mysterious and strange woman. When applying for her job, she says she would to anything for his boss and his family but smile. 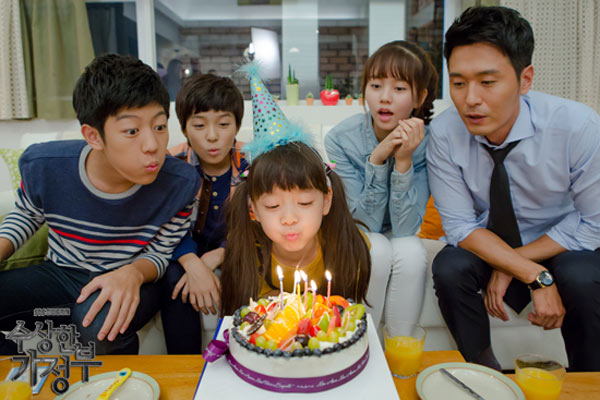 Starring in The Suspicious Housekeeper

Choi Ji Woo, the beautiful well known actress gives life to the main character, Bok Nyeo. A misterious woman that has too much pain inside. Her story as intriguing as it seems will be told in time.

Lee Sung Jae, this family’s father, I won’t say much about him because I don’t want to spoil anything if you haven’t seen it. He’s slow. If you have seen Gu Family Book you probably hate him from that part, but the one he plays here is really different. Great actor!

Kim So Hyun, I’ve been following her steps for quite a while now. She is really talented and I hope she handles her career well, with the last events we’ve known off. She plays the eldest daughter in this family, Han Gyeol, and the one that tries to keep the family together while being a teenager.

Chae Sang Woo, I have no idea if it was this part specifically, or he’s just not great performing, but for me he was the weakest in the whole story. In this family, he plays the eldest brother.

Nam Da Reum, is the little Se Gyeol, the smartest and also the school focused one. He’s going to be a great actor one day, he has also performed in great movies and dramas already.

Kang Ji Woo, an amazing young actress! Plays the adorable Hye Gyeol, the little one. She will make you smile and awww from the first episode to the end. The little girl will be the one that gets attached the most to the new housekeeper.

Also starring in The Suspicious Housekeeper

The Suspicious housekeeper is a great drama from beginning to end. The ending could be greater but I can’t tell you more about it. The OST is memorable, with songs from Yoo Sung Eun and Kim So Hyun.

One thought on “The Suspicious Housekeeper Korean drama review”